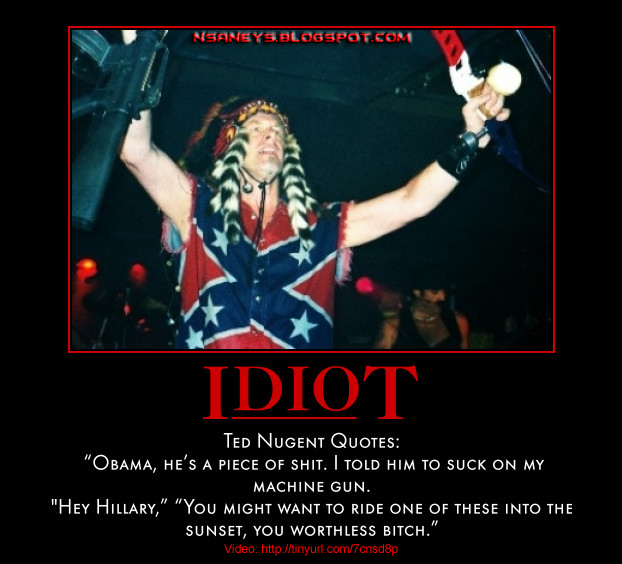 NRA Spokesman and Board of Director - Ted Nugent
Quote: Obama - Suck on my machine gun!
VIDEO
The true American patriot and Vietnam draft dodger Ted Nugent roams the stage yelling and ranting while holding up two machine guns:
“Obama, he’s a piece of sh**. I told him to suck on my machine gun." "Hey Hillary, You might want to ride one of these into the sunset, you worthless bitch.” He goes on to call Dianne Feinstein a "worthless whore."

Pedophile
This is the same guy that adopted a teenage girl so she could move in with him and he could pork her at will.

All the time, all mine mine
It's all right baby
It's quite all right I asked your mama

Deadbeat Dad
This republican poster child had to be sued to pay child support for all the various children he has had out of wedlock. A true family values kinda guy. lolz

Draft Dodger - Vietnam War
He also went for weeks without bathing and had been crapping on himself and pissing on himself before he went into the draft board to avoid being drafted to go to war in Vietnam. Yeah, he's a real f***ing patriot. Nothing but another poser exploiting hate, racism and bigotry to make big bucks.
Proof: Ted Nugent Is A Draft Dodger -Link

True patriots threaten to kill their countries democratically elected president
The Secret Service visits Ted Nugent for threatening the president of the United States of America's life. -Link
"If Barack Obama becomes the president in November again, I will either be dead or in jail by this time next year. "If you can't go home and get everybody in your lives to clean house in this vile, evil, America-hating administration, I don't even know what you're made out of."

Mr. Nugent was paid $50,000.00 by the NRA to make the speech where he threatened the president of the United States life.

“The Nuge” defended himself on Right Wing Radio, bemoaning,
“I’m a black Jew at a Nazi-Klan Rally!”

He is also banned from hunting or fishing anywhere in Alaska or on any U.S. Forest Service land nationwide for a year.
I have hunted all my life and this man gives hunters everywhere a bad name.